From the snow-capped summit of Mt. Kilimanjaro, to the vast herds of game grazig on the endless plains of the Serengeti and the game rich Ngorongoro Crater, as well as the sun-kissed beaches of Zanzibar, Tanzania is a land that has an allure for all. 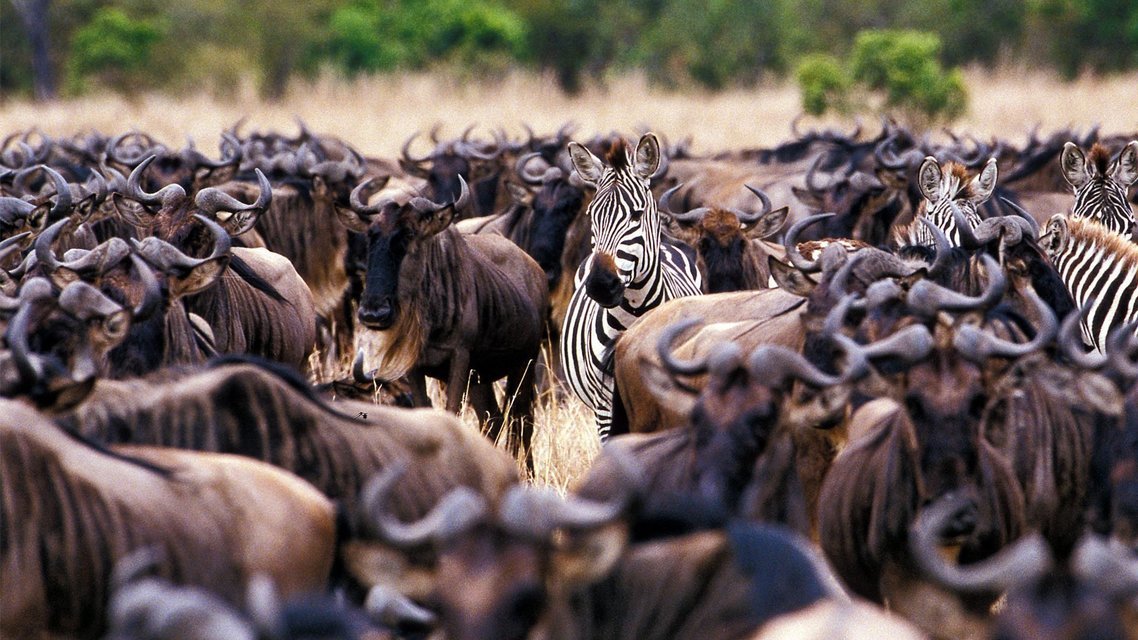 If you like to go big on adventure, this is the package for you. Six National Parks – Lake Naivasha, Lake Nakuru, Serengeti, Ngorongoro Crater, Lake Manyara, and Tarangire. One National Game Reserve – Masai Mara. Two countries – Kenya and Tanzania. Hundreds of species of wildlife, and birds, and plants. This experience has it all. These ten days are packed full of excitement to provide you with a supreme experience. 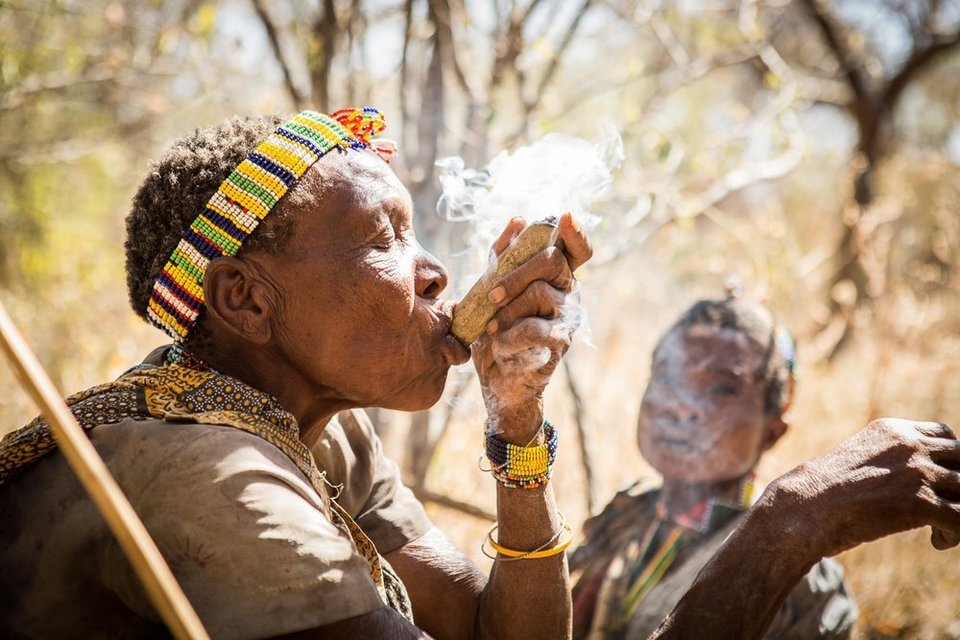 Lake Eyasi is a seasonal shallow endorheic salt lake on the floor of the Great Rift Valley at the base of the Serengeti Plateau, just south of the Serengeti National Park and immediately southwest of the Ngorongoro Crater in the Crater Highlands of Tanzania. The lake is elongated, orientated southwest to northeast, and lies in the Eyasi-Wembere branch of the Great Rift Valley. The Hadzabe Bushmen live in this region, as do the Datoga and Mbulu tribes. A visit with the Bushmen is worthwhile and they will graciously show you where and how they live and hunt. They subsist entirely off the bush and by bow hunting. Everything they use is made from local materials, including their bows which are strung with giraffe tendon and their arrows which are coated in lethal poison. Their language resembles that of Kalahari Bushmen tribe (who were featured in the 1980 film ‘The Gods Must Be Crazy’) with clicking noises used. The Datoga and Mbulu people are pastoralists, like the Masai people 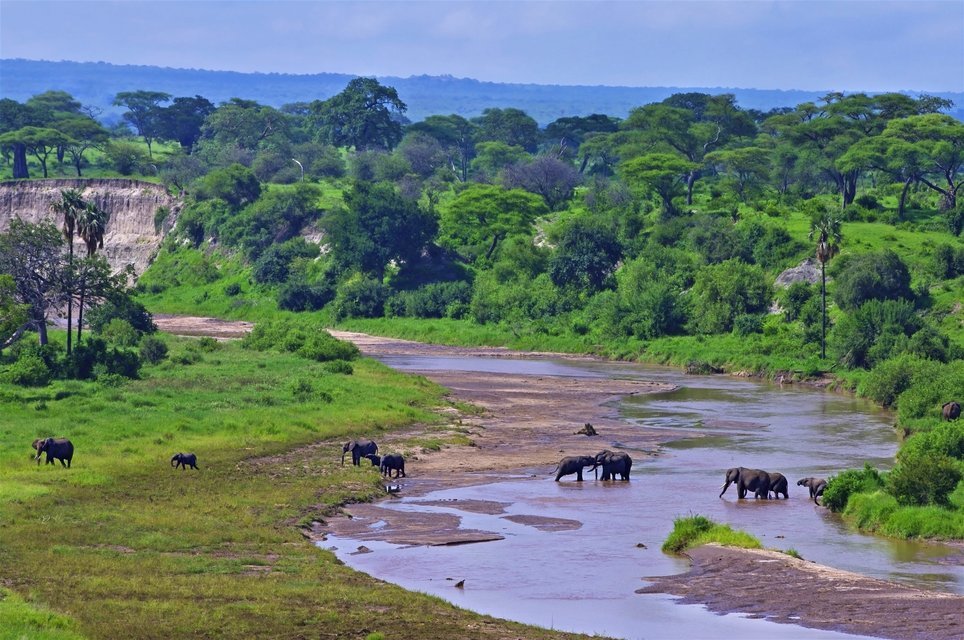 Welcome to one of Africa's most underrated parks. Thanks to its proximity to Serengeti National Park and Ngorongoro Crater, Tarangire National Park is usually assigned only a day visit as part of a larger northern-circuit itinerary. Yet it deserves much more, at least in the dry season (July to October). It's a place where elephants dot the plains like cattle, and where lion roars and zebra barks fill the night. 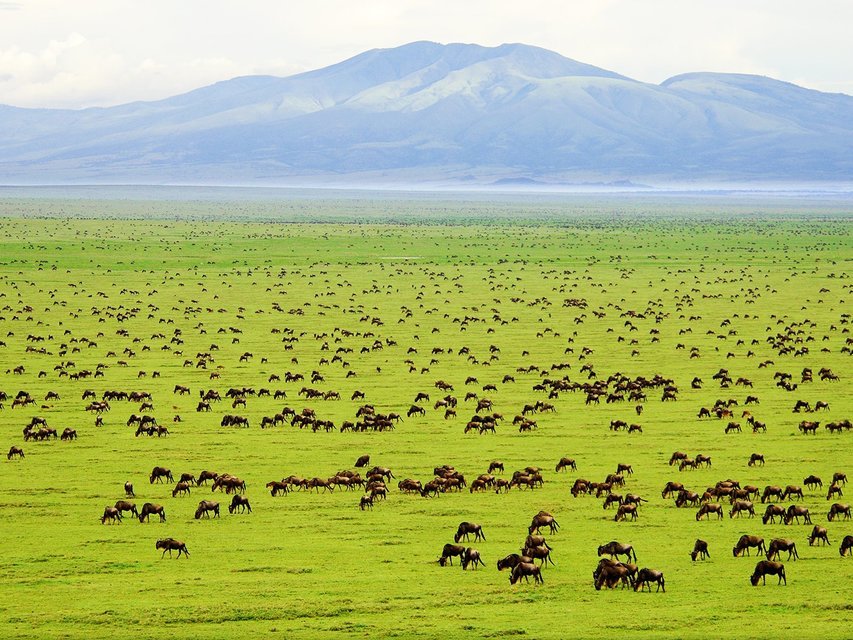 Saadani National Park is Tanzania's 13th National Park. Tourists can view animals basking along the Indian Ocean shores. It has an area of 1062 km2 and was officially gazetted in 2005, from a game reserve which had existed from 1969. It is the only wildlife sanctuary in Tanzania bordering the sea Saadani's wildlife population is increasing during recent years after it has been gazetted as a National Park and was a hunting block beforehand. Wildlife in Saadani includes four of the Big Five, namely lions, African bush elephants, Cape buffaloes and leopards. Masai giraffes, Lichtenstein's hartebeest, waterbucks, blue wildebeests, bohor reedbucks, common and red duikers, Dik-Diks, yellow baboons, vervet monkeys, blue monkeys, Colobus monkeys, mongooses, genets, porcupines, sable antelopes, warthogs, hippopotamuses, crocodiles, nile monitors are also found in the park. Since 2005, the protected area is considered a Lion Conservation Unit In additions: Gazetted in 2005, it encompasses a preserved ecosyteam including the former Saadani game reserve, the former Mkwaja ranch area, the wami river as well as the Zaraninge River. In the late 1960s Saadani Village – the village after which the park has been named – and particularly its sub-village Uvinje, invited the Tanzania Wildlife Division (WD) to help them to prevent the indiscriminate killing of wildlife prevalent in the area. From this partnership Saadani village and the Wildlife Division established the Saadani Game Reserve (SGR), with the agreement to respect the land rights of the coastal sub-villages of Saadani, including Uvinje and Porokanya sub-villages, while also addressing the needs of wildlife. As such, conservation interventions in the Saadani landscape have taken place since the mid-1960s and have been supported by villagers traditionally inhabiting the Saadani landscape, but it is only recently that state-managed conservation has become a growing concern among the villages adjacent to the park. In the late 1990s, Mr. Domician Njao, from Tanzania National Parks Authority (TANAPA) came in to "upgrade" the reserve to a National Park, and create the first and only coastal national park of Tanzania. In doing so, park authorities redrew the boundaries of the reserve to include Uvinje’s and Porokanya’s prime coastal lands as if they have always been a part of the reserve The vagueness of the language used in the reserve’s official gazette,but also TANAPA’s early interventions to develop its own map of the reserve, and its interests in Saadani’s sub-villages’ prime coastal lands have come to challenge Saadani’s coastal sub-villages’ rights to lawfully inhabit their traditional territories, and have led to chronic political and other battles to demand presently gazetted park lands rescinded, the reestablishment of land rights to traditional inhabitants, and to demand from TANAPA to honour commitments made earlier by Wildlife Division 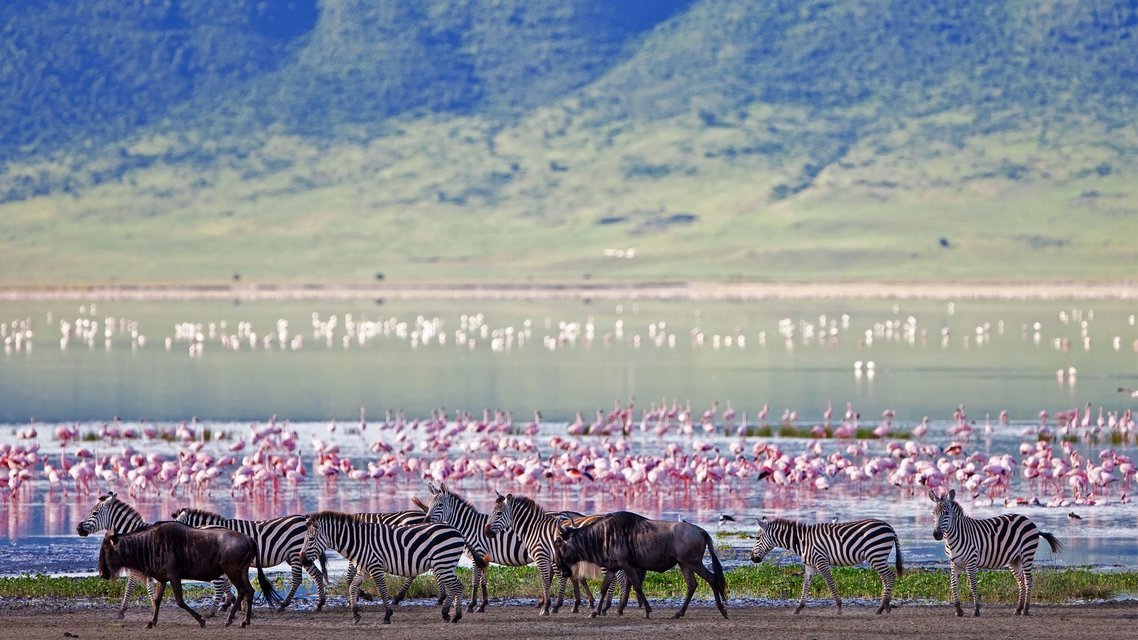 At 19km wide and with a surface of 264 sq km, Ngorongoro is one of the largest unbroken calderas in the world that isn’t a lake. Its steep walls soar 400m to 610m and provide the setting for an incredible natural drama, as prey and predators graze and stalk their way around the open grasslands, swamps and acacia woodland on the crater floor. It's such an impressive sight that, other vehicles aside, you'll wonder whether you've descended into a wildlife paradise. There are plenty of hippos around the lovely Ngoitoktok Springs picnic site, and Lake Magadi attracts flocks of flamingos to its shallows in the rainy season. Lereal Forest (which has a less appealing picnic site, and is the starting point for the Lereal or Lerai ascent road) is good for elephants, of which there are 200 to 300 in the crater.

Lake Manyara National Park is a Tanzanian national park located both in Arusha Region and Manyara Region Lake Manyara National Park is known for the flamingos that inhabit the lake. During the wet season they inhabit the edges of the lake in flocks of thousands but they are not so present during the dry season. More than 400 species of birds inhabit the park and many remain throughout the year. Because of this Lake Manyara National Park is a good spot for bird watching. Visitors to the park can expect to see upwards of 100 different species of bird on any day. Leopards, lions, cheetahs, elephants, blue monkeys, dik-dik, gazelles, hippopotami, Masai giraffe, impala, zebras and many more wild animals inhabit this park and many can be seen throughout the year. There is a hippo pond at one end of the park where visitors can get out of their cars and observe from a safe distance. The leopards and lions are both known to lounge in the trees while not hunting for prey. 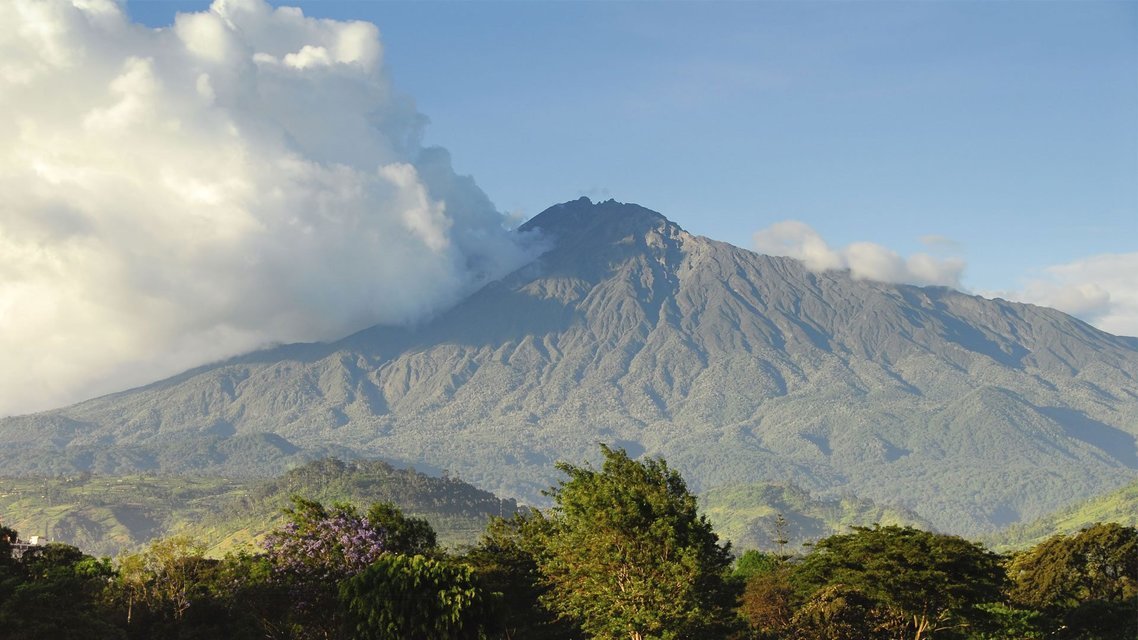 The Meru Mountain is the 9th highest peak in Africa and the second highest mountain in Tanzania at 4,566m. The Mount Meru can be climbed for short day from 3 to 4 days. The Mount Meru located within Arusha National Park, and usually the Climber can start the trip from Arusha, in the Northern Tanzania. This major location provides Mount Meru climbers the chance to spot some wildlife that naturally inhabits the area. The ascend is fairly steep, the route to the summit passes over watercourse, through parkland, montane forest, a giant heather zone and moorland. The summit is made by a narrow, barren ridge, which gives spectacular views of the Ash Cone lying several thousand feet below in the crater. 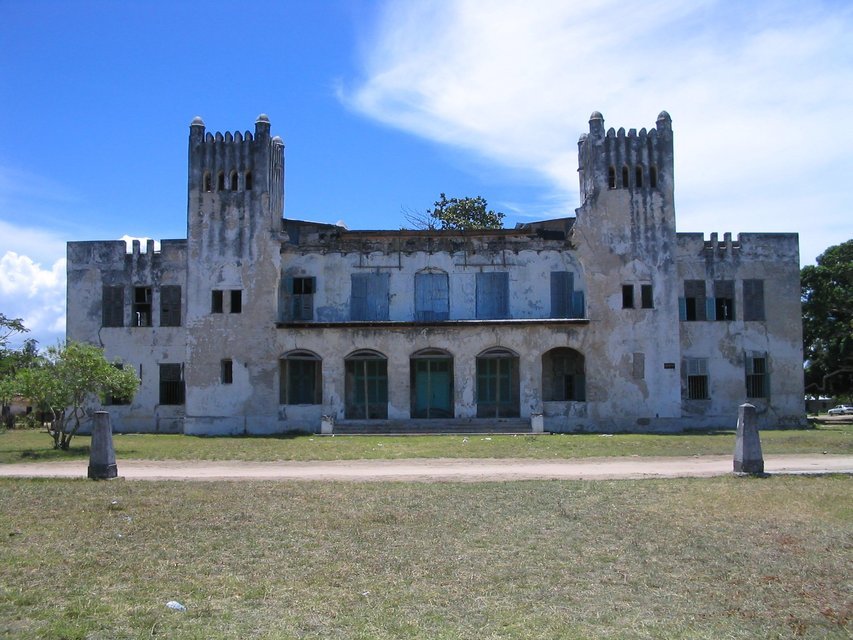 Early breakfast, drive to Bagamoyo for full day, after spending your full day in Bagamoyo you will return to your lodge for dinner &amp; overnight Bagamoyo, Tanzania, is a town founded at the end of the 18th century, though it is an extension of a much older (8th century) settlement, Kaole. It was the capital of German East Africa and was one of the most important trading ports along the East African coast along the west of the Indian Ocean. Now, the town has about 30,000 inhabitants and is the capital of the Bagamoyo District. Bagamoyo it lies 75 kilometers (47 miles) north of Dar-es-Salaam on the coast of the Indian Ocean, close to the island of Zanzibar The original settlement, Kaole, was founded c. 800 CE, and grew into an important trading town by the 13th century. The Kaole Ruins contain the remnants of two mosques and 30 tombs, dated back to the 13th century. Around the 17th century, the settlement 2-3 miles north of Kaole began growing. This area grew in prosperity, acquiring the name Bagamoyo by the 18th century as an important stop in the caravan trade (the name means "take the load off and rest"). Until the 18th century, Bagamoyo was a small trading center where most of the population was fishermen and farmers. The main trading goods were fish, salt, and gum, among other things. Bagamoyo became the most important trading entrepot of the east central coast of Africa in the late 19th century. In the late 18th century Muslim families settled in Bagamoyo, all of which were relatives of Shamvi la Magimba in Oman. They made their living by enforcing taxes on the native population and by trading in salt, gathered from the Nunge coast north of Bagamoyo. In the first half of the 19th century, Bagamoyo became a trading port for ivory and the slave trade, with traders coming from the African interior, from places as far as Morogoro, Lake Tanganyika and Usambara on their way to Zanzibar. This explains the meaning of the word Bagamoyo ("Bwaga-Moyo") which means "Lay down your Heart" in Swahili. It is disputed whether this refers to the slave trade which passed through the town (i.e. "give up all hope") or to the porters who rested in Bagamoyo after carrying 35 lb cargos on their shoulders from the Great Lakes region (i.e. "take the load off and rest"). Since there is little evidence to support that Bagamoyo was a major slave port (Kilwa, much further south, has earned this status and that tens of thousands of porters arrived at Bagamoyo annually in the latter half of the 19th century, it is more likely that the name of the town derives from the latter interpretation. The slave trade in East Africa was officially prohibited in the year 1873, but continued surreptitiously to the end of the 19th century In 1868, Bagamoyo local rulers, known as majumbe, presented the Catholic "Fathers of the Holy Ghost" with land for a mission north of the town, the first mission in East Africa. This caused resistance by the native Zaramo people which was mediated by representatives of Sultan Majid and, after 1870, by Sultan Barghash. Originally the mission was intended to house children who were rescued from slavery, but it soon expanded to a church, a school, and some workshops and farming projects. But Bagamoyo was not only a trade centre for ivory and copra; it was also a starting point for renowned European explorers. From Bagamoyo they moved out to find the source of the River Nile and explored the African inner lakes. Some of these were Richard Francis Burton, John Hannin  Speke, Henry Morton Stanley and James Augustus Grant. Although often believed so, David Livingstone had never been to Bagamoyo in his lifetime. Only after his death he was laid out in the Old Church's tower (nowadays named Livingston Tower) to wait for the high tide to come in and ship his body to Zanzibar. Bagamoyo was the first capital of the colony while serving as the German headquarters of German East Africa (first under the auspices of the German East African Company and then the German Imperial Government) between 1886-1891. Dar es Salaam became the new capital of the colony in 1891. The town was apparently the (1895) birthplace of SS-Oberführer Julian Scherner. During World War I, on August 15, 1916, a British air attack and naval bombardment was launched on Bagamoyo, the Germans were overrun and the German garrison taken. When the German Empire decided to build a railway from Dar es Salaam into the interior in 1905, Bagamoyo's importance began to decline 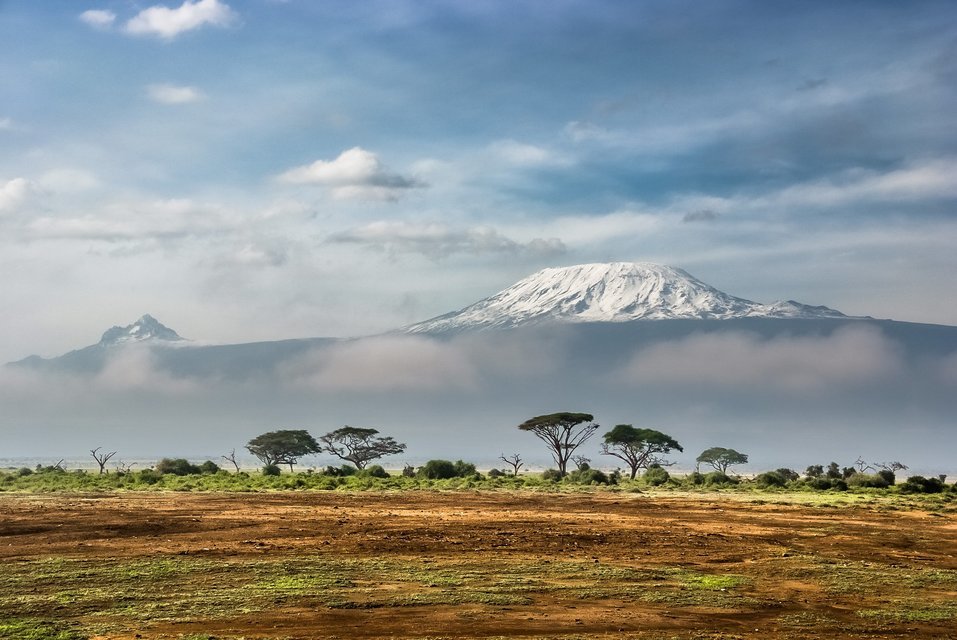